My brother David, pictured below, died February 4, 2002 of an Anaplastic Astrocytoma, Grade III. To honor his memory and his courage throughout his 6 year battle, we invited the best young tennis players to compete in this annual event. Over the 14 years that we have run our Tennis Tournament, our grassroots efforts have raised over $44,000, ($2000 over our goal) for brain tumor patients and research. The annual event was held at the South Olive Tennis Center in October. The David Strage Memorial Super Series was awarded the Bobby Curtis USTA Junior Tournament of the Year 2010.

Most of the funds raised from the event have gone to the incredible work that the Hadassah Medical Organization has been doing in the area of Stem Cell Research. Every month we hear about more advances that the Hadassah team is making to eradicate diseases including brain tumors. One day, I hope, that a sister will never have to say goodbye to her brother, a husband to his wife or a parent to his child.

Please contact me personally at Jennifer@busiwerks.com or (561) 308-1159  go to SouthOliveTennis.com if you want additional information.

BOBBY CURTIS TOURNAMENT OF THE YEAR 2010 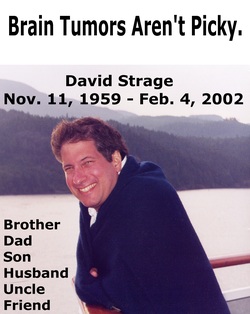 Now in its fifth year, The David Strage Memorial Super Series has raised $15,000 for brain tumor research. Named after David Strage, who died at 42 of an inoperable brain tumor, the tournament has educated participants about brain tumors through awareness off the court and sportsmanship on the court, holding fast to a zero tolerance policy for inappropriate behavior.

Over the years, 600 players, representing 18 countries, have competed in a tournament that brings out a generous and kind spirit in players that is not always visible at tennis' highest competitive level.

Because the tournament has a special focus, the gifts it provides its players are equally unique. These include an event shirt that lists famous people who have died of brain tumors, engraved participant medals, and dog tags.

During the tournament, about 35 individuals volunteer from the local community as well as from local high schools. In addition, younger children get involved by coordinating an annual bake sale and donating the proceeds to the event.

Thanks to this collaborative spirit, the David Strage Memorial Super Series is this year's well-deserved Bobby Curtis Junior Tournament of the Year honoree.

Held in Jacksonville, FL for the first time in 2018, we brought “Triples” from South Olive Tennis to the Jacksonville community. In its inaugural year, the tournament brought together 28 teams of 3 and a host of spectators together for a dinner Friday night and a tournament and BBQ Saturday. The event raised over $55,000 for Pediatric Cancer Research and is now a regular event. Register for this year and read more about Kate's Kup here